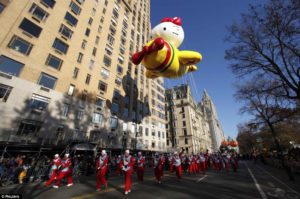 New York City is one of the places in the world where important and famous events happen all along the year. One of these events is the Macy´s Thanksgiving Day Parade that is organized and presented since 1924 by the American chain of department stores Macy´s.

In the twenties of the 20th century many of the employees of Macy´s were immigrants of the first generation and they wished to celebrate this U.S.A. parade with a type of festival that their relatives would like in Europe.

The Thanksgiving Day is a national holiday mainly in Canada and in the United States of America, but also in Liberia (Africa), Grenada (an island in the Caribbean Sea) and in the Australian territory of Norfolk Island; in the Netherlands the in attention to the pilgrims from the city of Leiden who migrated for the United States there is also a religious service at the gothic church of Leiden; this holiday intends to give grace to God for the blessing of the yield of the pasted year, and has its historical origins in traditions of culture and religion.

The Thanksgiving Day is celebrated in the United States, since 1941, according to a federal legislation, on the fourth Thursday of November.

For those that happens to be in New York in that period and wishes to assist to the Parade a GPS app for smartphones is a useful mean to follow the event.

The Parade always takes place in one of the five boroughs, or a municipal corporation, of New York City, Manhattan (the other boroughs are The Bronx, Brooklyn, Queens and Staten Island) where Macy´s is located. In the fist times the Parade started from 145th Street in Harlem and had its end at Herald Square (the place where Macy´s is located), covering a way of 6 miles.

In the thirties of the 20th century the Parade knew another route, from the 110th Street and Amsterdam Avenue, continuing by the 106th Street, the Columbus Avenue, Central Park West and terminated at Herald Square.

In 2009 it was establish a new route on your Samsung navigation app, starting in the 77th Street and Central Park West, passing by Central Park, Columbus Circle, Central Park South, 7th Avenue, Times Square, Bryant Park and 6th Avenue, returning back to the 7th Avenue where it ended; with this new way the Broadway stays out of the Parade.

In 2012 there was a new change of the route, similar of the route of 2009, but eliminating Times Square from the path.

The most iconic elements of the Parade are the balloons carried by the participants of the Parade that were introduced in 1927, and that each year represent figures of cartoons and animation movies, such as Felix the Cat (the first one), Mickey Mouse, Superman, Toy soldier, Popeye, Donald Duck, Hello Kitty, Woody Woodpecker, Garfield, Betty Boop, Pink Panther, Snoopy, Bugs Bunny, Bart Simpson, Pikachu, Shrek and Papa Smurf; at the end of the Parade the balloons are released to the air.

Since 1971 it was introduced in the Parade a combination of balloons and vehicles, known as “balloonicles” and “fallons” (float-based balloons); these elements presented themes and figures, such as Humpty Dumpty, Weebles, Polar Bear, Sesame Street, Masters of the Universe, 101 Dalmatians, Bob the Builder, Walt Disney World 50th Anniversary and Barbie as the Island Princess.